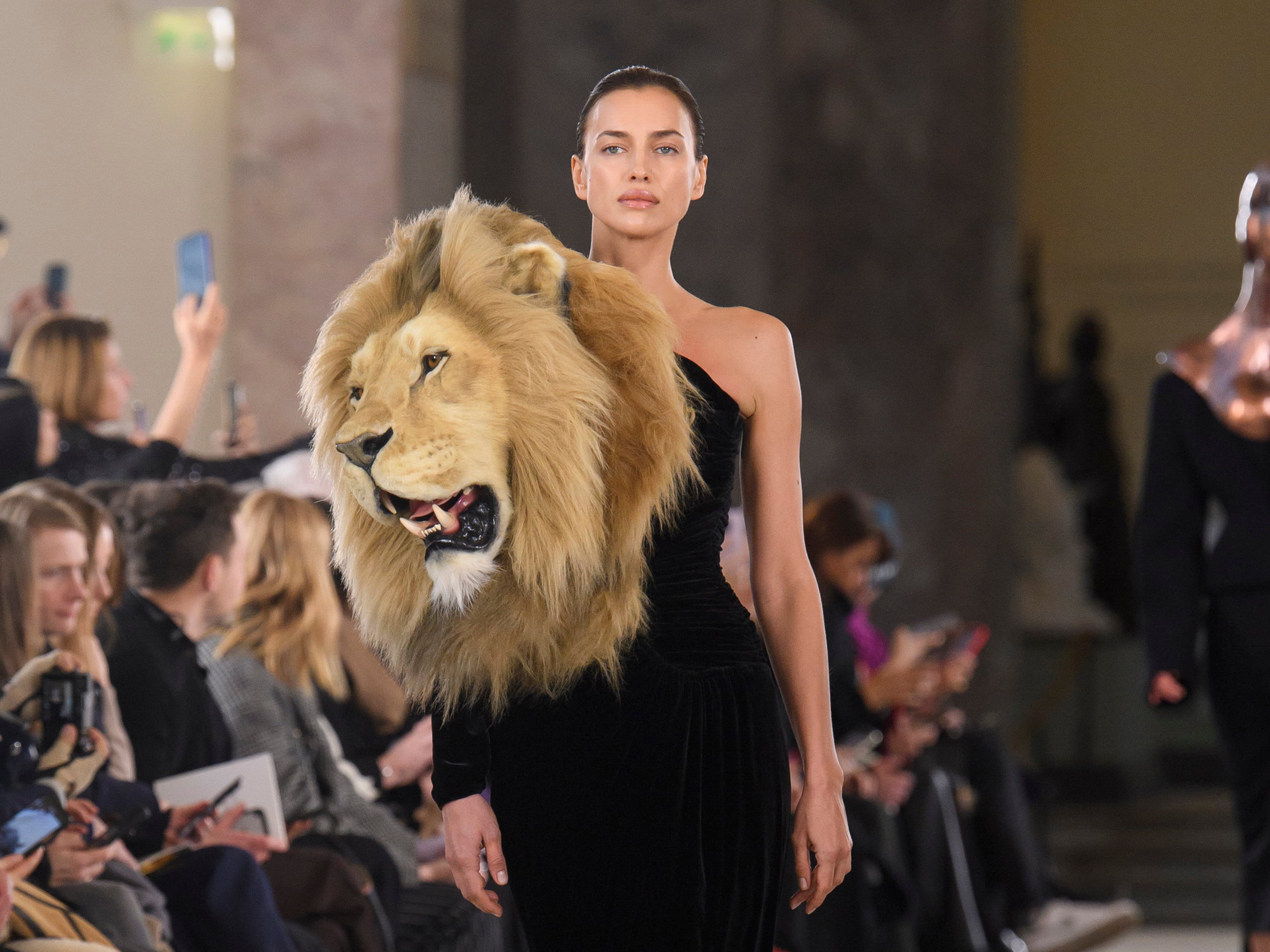 Or could it be both?

Surrealist beauty looks. Gravity-defying designs. A viral scandal that has left the internet divided. Schiaparelli kicked off Paris haute couture week with a show that, for better or worse, had it all.

On January 23, the Parisian fashion house debuted a collection of expert tailoring, detailed embellishments and gilded faces that set the tone for a week of shocking sartorial statements. But what left the biggest impact was creative director Daniel Roseberry’s decision to send supermodels Shalom Harlow, Irina Shayk and Naomi Campbell down the runway wearing life-like animal heads on their ensembles.

Rest assured, they were not real carcasses, but hand-crafted recreations using materials like foam and resin. Harlow, Shayk and Campbell wore a leopard, a lion and a wolf, respectively. And before the show even began, Kylie Jenner emerged wearing the same Schiaparelli lion dress that Shayk would later wear on the runway: a long black gown with an oversized lion head perched on the shoulder.

“No animals were harmed in the making of this look,” the brand wrote in an Instagram post showcasing each creation, including the Schiaparelli lion dress. According to Roseberry, the creatures were meant to reference lust, pride, and avarice from the 14th-century allegory Dante’s Inferno. But some took the implication of animals as accessories as off-putting, out of touch and even “disturbing.”

Although the creatures were fake, many saw the in-your-face designs as an idolization of wearing animals while simultaneously downplaying trophy hunting and the power dynamics it implies. The murky practice has long been deemed an “elitist” hobby, as moneyed hunters pay hefty fees to kill for sport. With this cultural context, aestheticizing an animal head inherently implies inaccessible wealth and excess.

At the same time, Schiaparelli’s collection is not the first instance in which the likeness of animals has been used in fashion, and it likely won’t be the last. Some argue that Roseberry has presented a more sustainable alternative to animal imagery on the runway by employing synthetic iterations instead of real carcasses.

The presentation has already drawn comparisons to the fashion house’s real fur designs from decades ago. In that vein, Schiaparelli’s latest line holds up a mirror to fashion’s use of dead animals and points out the ridiculous tradition of making carcasses into decorations. In so doing, it also draws attention to other systemic ethical issues.

With pervasive tactics of greenwashing and the shady underbelly of fast fashion, there is possibly no such thing as completely ethical consumption in the clothing industry. Through these detailed creations, perhaps Schiaparelli is communicating just that. But if that is the underlying message being conveyed here, it has led some to wonder: Is this really the right setting to do so?

After all, haute couture functions on the premise of exclusivity. With the expensive materials used, the labour-intensive production process and a consumer base comprising the economic elite, each couture garment is made for the (very privileged) person wearing it. Ultimately, imagery of the ultra-rich wearing animals (à la Kylie Jenner) is not exactly groundbreaking. At this point, it’s arguably antiquated.

In an Instagram post, Roseberry shared his intention behind the meaning of the designs, writing that each animal was “celebrating the glory of nature and guarding the woman who wears it.” In that vein, the provocative creations add another layer to the urgent notion of “protective” dressing, which has become a runway staple in light of turbulent world events. Even still, the decision to equate dead animals with decorations comes with its own set of insidious implications in the midst of the climate crisis and growing economic uncertainty. But perhaps these conflicting takeaways are all, in fact, intentional.

Outlandish, near-offensive designs have become a crafty way for fashion houses to grow brand awareness and get people talking via a viral moment. Haute couture is a prime example: it’s not supposed to be wearable and accessible, it’s meant to stand out. As such, courting internet controversy is a contemporary marketing tactic that never fails to turn heads.  But in the effort to garner salacious headlines, it’s gotten more difficult to discern the boundary between artistic freedom and tone-deaf commentary.

In Schiaparelli’s case, the question remains: was the goal to revere nature, to critique consumption or to simply dominate social media feeds for a day? The answer doesn’t really matter, because haute couture is supposed to spark thought-provoking discourse. Love it or hate it, Schiaparelli’s Spring 2023 couture collection did just that.