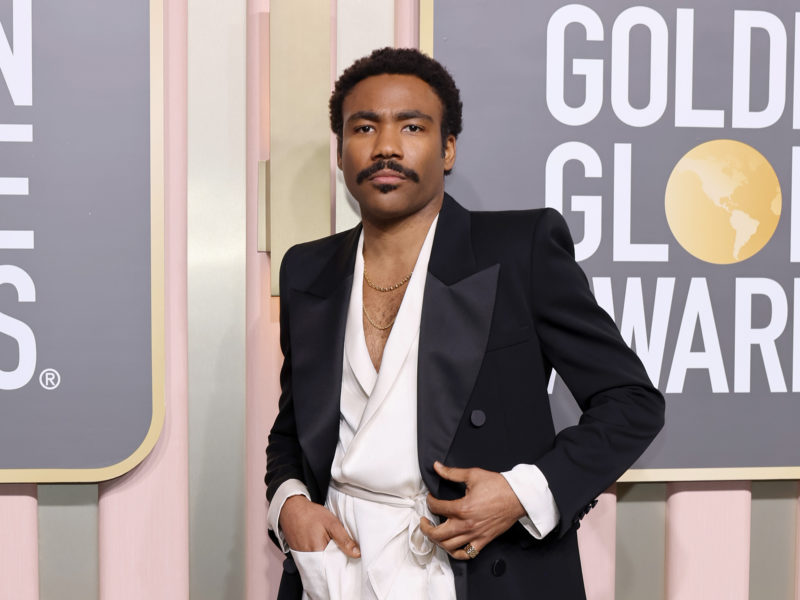 Did someone say fairy godmother?

To paraphrase Groucho Marx: behind every well-dressed man is a woman. Never has the statement read more true than at this year’s Golden Globes where the fashion for men was frivolous and fun. The slouchy suit worn by Tyler James Williams, winner of Best Supporting Actor in a Comedy/Drama Series? Chosen for him by stylist Ashley North. Seth Rogen’s pastel pink ensemble? The brainchild of sisters Wendi and Nicole Ferreira. Jeremy Pope’s all-leather look? Well, we can’t confirm who his stylist is, but we’re going to guess it was a woman.

But the true winner of the night was Ilaria Urbinati, who styled not one, but five of the best-dressed men of the night. Donald Glover appeared to have just stepped out of a time machine from the 1970s in the best way possible, wearing a relaxed white tunic and trousers paired with a tailored black jacket by Saint Laurent. Adam Scott, whose wardrobe is vastly underrated, and Diego Calva both served Emerald City realness in two green tuxedos by Paul Smith and Gucci respectively. And then Barry Keoghan blinded us with beautiful dove blue thanks to his custom Louis Vuitton suit.

Winning the red carpet isn’t anything new for Urbinati. She’s affectionately known in Hollywood and fashion circles as the “superhero stylist” because of her Marvel/D.C-related clientele. Think Chris Evans, Ryan Reynolds, Tom Hiddleston, Bradley Cooper, Ben Affleck, Dwayne Johnson, James Marsden and others. And while this group of men might not jump out at you for being supremely stylish, Urbinati told The Washington Post in 2019 that her goal is to make them look “interesting” and “unexpected” as opposed to “peacocking” with over-the-top ensembles. Considering the leading man energy that all of her clients gave at the 2023 Golden Globes, we would consider that mission was accomplished.

Below we’ve rounded up the best fashion moments for men at the 80th Golden Globes, including Urbinati’s clientele and other deserving celebs.