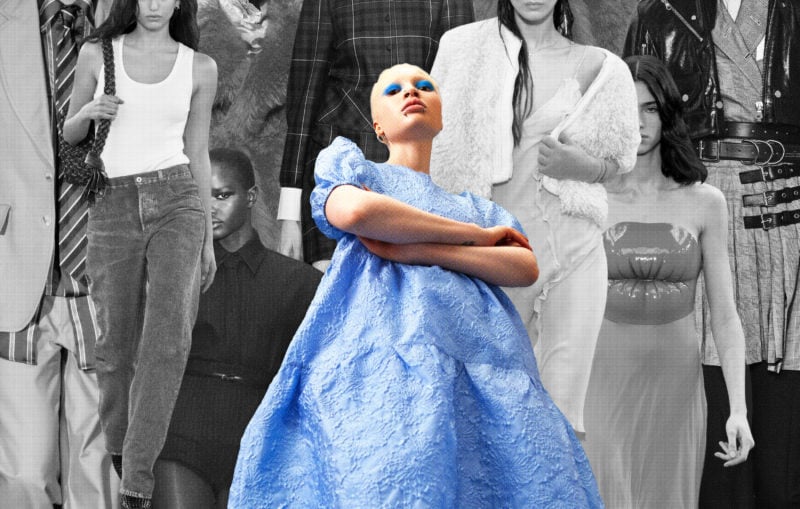 Growing up in the 2000s, I received my fashion education almost exclusively from TLC’s hit show, What Not to Wear. Running from 2003 to 2013, the makeover series was hugely influential thanks to its always-chic, brutally blunt hosts: stylists Stacy London and Clinton Kelly.

Each episode spotlighted one contestant — usually a woman — who had been submitted by people in her life to undergo a wardrobe revamp. After being ambushed (usually in front of a large crowd) and agreeing to participate, she would then have to relinquish the contents of her closet and her fashion opinions to be beautified by the all-knowing hosts. Yes, to be nominated for What Not to Wear was to learn that nearly everyone you love thinks your appearance needs “fixing.” Guided by a set of strict instructions, each episode ended with contestants looking nothing like they did in the beginning.

It was a maniacal masterpiece. Over the course of a decade on the air, What Not to Wear’s undeniable entertainment factor thrived off a premise of formulaic episodes with rigid fashion rules. As I watched, I impulsively agreed with London and Kelly while they dished out quippy clothing insults and recited shopping edicts in the name of dressing more “flattering.” I was drunk off the power of pretending to be a pseudo-stylist, and along the way, I was simultaneously burying my ability to form my own outfit opinions.

It should be noted that this was a time when the fashion world was overwhelmingly defined by thinness. Worst-dressed lists were still widely accepted and body shaming in mainstream media went unchecked. It would seem that in 2023, we’ve come a long way — Stacy London has since shared her own grievances with the show — but the truth is that a lot of these “rules” are still deeply ingrained in the way we think about our wardrobes, and in turn, our bodies.

Many traditional outfit faux pas are rooted in fatphobia, ageism, racism and ableism, says Monique Black, a model and fashion influencer. “I’m a big proponent of wearing whatever the hell you want,” she tells me. This perspective came after years of unlearning the dressing dogmas of fashion authorities like What Not to Wear. “[Younger] me would be shocked that I wear crop tops or [show] my back rolls,” she explains. But with the resurgence of Y2K and the growing prediction that “thin is in” again, it’s increasingly important to challenge harmful beauty standards. For the sake of journalism, I revisited the show and its many fashion falsities. Here are the dusty fashion rules I’m unlearning in 2023.

Rule #1: Outfits should be “flattering” for your body type

In December 2022, TikTok creator @jackies.house went viral with a video titled, “stop only wearing flattering clothes.” The post sparked a trend of videos explaining how rejecting sartorial laws is the key to finding personal style. Though the term “flattering” is commonly used as a justification for dolling out fashion advice, it’s also perceived as a thinly veiled way of saying that larger bodies should aspire, above all else, to look smaller.

“For the longest time, I only wore jeans and a body suit or a black top because I felt like I needed to like prove to the world that I… had a shape. I’ve always been curvy so that was a main priority to me,” says creator Hannah Joy in a TikTok video, adding that this approach stifled her creativity in the long run. “I promise there is a way to wear fashionable clothing and not always try to look your thinnest or look the most ‘flattering’ and the most ‘shapely.’” One of the top comments: “I blame What Not to Wear.”

A renowned ritual on the show was the infamous 360-degree mirror scene, in which a contestant would stand surrounded by their reflection whilst having their outfit choices picked apart. The criticism was almost always the same — that they weren’t dressing in a “flattering” way. But what does that really mean? “I feel like ‘flattering’ is used to hide, maneuver around or cover up the parts of your body that society wouldn’t like — like back rolls or stretch marks,” Black says, adding that she often views the term as code for “something that hides your body in an acceptable way [and] makes your body conform more towards thinness.” At the root of this rule is the implication that there’s an ideal body that we should all aspire to have. Not only is that untrue, it’s just plain boring.

Rule #2: Clothes have an expiration date

I grew up thinking my clothes had an intrinsic clock; a finite time in the fashion lifecycle before becoming decidedly uncool (read: cheugy). This mindset, unsustainable as it is, has long been an accepted standard within many high-fashion spaces. Case in point: instead of teaching contestants to style the pieces they already had, What Not to Wear regularly replaced entire wardrobes with brand-new items.

All signs of quirky individuality were erased to give subjects a cookie-cutter business casual look. As such, contestants would trade their “bad” clothes for trendy pieces that were emblematic of the era (think: chunky necklaces, statement belts, ultra-skinny jeans). The irony here is that now those very pieces, as with all cyclical trends, are considered outdated. The lesson to be learned? Wear something if you like it, not solely because it’s in vogue.

Rule #3: Dress for your age — and gender

Season 12 episode 2 follows Lizz, a mom whose wardrobe is deemed either “frumpy” or “over-sexy.” While she loves her revamped look in the end, I can’t help but notice the takeaway message: women past a certain age only look good if they’re strategically accentuating their figures without showing too much skin. The thing is, as women get older, there seem to be increasingly rigid regulations for dressing the “right” or “wrong” way. These guidelines only reinforce insecurities, argues Black. “What other way can you control a successful woman who makes her own money, has her own life, has her own house? You pick at the one thing she can’t stop, which is aging.”

In the very next episode, a contestant named Courtney is told, “you can’t really see whether you’re a boy or a girl under [your clothes].” She’s made to throw away her camouflage jackets and pepper her wardrobe with corporate-appropriate dresses. But after her transformation is complete, she looks visibly uncomfortable and kind of sad — not empowered. Rules of age-appropriate femininity, be gone!

While some of the show’s subjects were openly uninterested in fashion, others had distinct personal styles that made them happy — but that were deemed odd. This very weirdness, however, can actually be the key to finding personal style.

Today, pattern-clashing, colour-blocking and once-maligned shapeless silhouettes are being celebrated. With the viral popularity of the “weird girl aesthetic” and contemporary kooky fashion legends like Emily Cooper, there’s a growing movement to honour your inner child instead of catering to the opinions (and eyes) of others. But it still takes work to master this mindset. “It wasn’t until I removed myself from the need to be desirable all the time that I finally started developing a sense of personal style,” says TikTok creator Simi Muhumuza.

Abandoning desirability is the first step towards self-acceptance, says Black. To do so, she suggests focusing on the beauty of a garment as opposed to the way it looks on you. “When you shop for the love of fashion and the love of clothes, or just the enjoyment of treating yourself or adding another piece to your wardrobe, it takes away [the focus from] your body.”

At the end of the day, stiff styling rules set exclusionary limits on who can and can’t participate in fashion. While What Not to Wear first piqued my interest in clothes, it also regrettably taught me to base my outfits on formulas instead of feelings. But society has outgrown the makeover genre. And as I’ve come to learn, there’s power in not trying to be palatable. So, in 2023, I resolve to do just that.

ASMR | What I Eat In A Week [Healthy Lunches]
Why Levi’s 501 Is Still the Most Iconic Pair of Jeans
This Super Bowl, I’m Rooting For Everybody Black
Jane Fonda Reflects on Her Past Eating Disorder: “It’s a Very Lonely Thing”
All Your Day Needs Is This 10-Minute Latin-Inspired Dance Workout