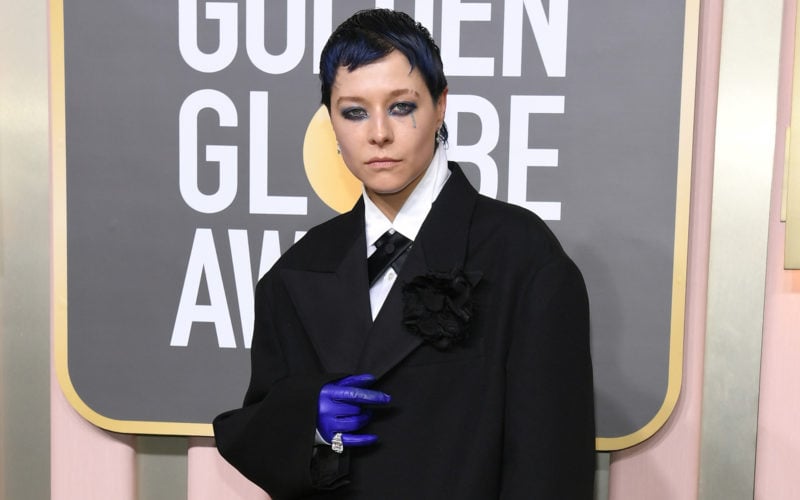 This year’s Golden Globes made a few things abundantly clear: menswear has entered its Hot Girl era, Rihanna and A$AP Rocky still take the cutest couple pics, and most importantly, Emma D’Arcy is a subversive style icon in the making.

At the January 10 event, D’Arcy (who identifies as non-binary and uses they/them pronouns) was nominated for Best Television Actress in a Drama Series for their performance in House of the Dragon. To mark the occasion, they donned an avant-garde Acne Studios tuxedo comprised of an oversized jacket, black trousers and a black skirt layered over top. The actor paired this look with midnight blue hair, smudgy cobalt eye makeup and a pair of purple gloves from Paula Rowan. To top it all off? A diamond pinky ring (!) that may have weighed more than their entire finger. Balancing moody messaging with alluring opulence, the deliciously complex ensemble was the ultimate emblem of D’Arcy’s fashion prowess.

“I think the vibe is like, a child piano prodigy, and maybe the recital’s not gone well,” they told E! News, as they stood on the red carpet with a sparkly blue tear painted on their face. This may seem oddly specific, but it’s exactly the kind of aesthetic precision D’Arcy delivers again and again on the red carpet.

As a relative newcomer to the Hollywood scene, the 30-year-old has recently gained major notoriety. After all, it was but a few short months ago that Emma D’Arcy went viral when the world developed a collective crush on them. While revealing their favourite sexy-sounding drink — “A negroni. Sbagliato. With prosecco in it.” — back in October 2022, D’Arcy’s undeniably hot mystique sent social media into a tailspin and prompted a surge in demand for the Italian recipe. Of course, nowhere better does this trendsetting cool factor come to life than on the red carpet.

Over the past few months, D’Arcy’s forays into red carpet fashion have been odd, expressive and chic all at once. With dramatic hair transformations and futuristic makeup designs, they’re clearly not afraid to become almost unrecognizable with each new appearance. With the help of stylist Rose Forde, D’Arcy’s ensembles borrow from different aesthetics while incorporating specific staples like exaggerated layering, androgynous silhouettes, and, as it turns out, a good statement glove.

Case in point: Emma D’Arcy’s look at the London premiere of House of the Dragon in August. At the event, they opted for an edgy romantic ensemble in a golden vest paired with an oversized white blouse, black leather pants and intricately embellished gloves by Acne Studios. Their spiky white hair, bleached brows and eyeshadow reminiscent of dark circles added a layer of mystique to the theatrical outfit.

This was a sharp pivot from the month before, when D’Arcy attended the show’s world premiere in Los Angeles wearing a goth get-up with luxe detailing (below). They paired a sleek turtleneck with a gargantuan suit by Vetements, completing the look with dangling diamond earrings and crisp white platform shoes. This time, their hair was an auburn-brown as they opted for invisible brows, red lips and minimal eye makeup.

Things took yet another aesthetic turn in November when D’Arcy debuted fiery red hair at the GQ Men of the Year Awards. Sporting their newly-dyed slick strands with a no-makeup makeup look, they let their all-leather Alexander McQueen ensemble do the talking. From head to toe, the look emitted both intrigue and intensity. Herein lies the greatness of D’Arcy’s shape-shifting style.

Though different from one another, each of D’Arcy’s contemporary outfits emits an air of contemplativeness; a sense that they are truly taking risks while experimenting with their self-expression. And that is not as easy as it looks. “When I was starting out, I really felt that I had to pretend to present as a woman in order to find success in this industry,” D’Arcy continued during their interview with E! News at the Golden Globes. “Anyway, it wasn’t sustainable, and I stopped pretending. And weirdly, it’s at that point that I got nominated for Best Actress at the Golden Globes, which is like, beautifully ironic.”

Although the entertainment industry touts improved inclusivity, there are still unspoken expectations for how queer people can and should present themselves on the red carpet. With male vs. female best-dressed lists and award categories divided by gender, the system of show business inherently excludes people who are gender non-conforming. Ultimately, that’s exactly why representation from stars like D’Arcy is so crucial.

“I think the most important thing is that, for me, [my nomination] implies that the space for trans people and gender non-conforming people is getting bigger all the time,” they continued. At the Golden Globes, Emma D’Arcy yet again exuded magnetic confidence and thought-provoking gender fluidity. Above all else, with each red carpet look, they honour who they are. And what’s more iconic than that?

Women, It’s Time For Us To Stop Wearing Yoga Pants | Ep. 86
The Truth About ADHD & Exercise (and the Hardest Barriers we Face)
Belly Fat Burning🔥Exercises for women at home | EMMA Fitness
5 Celebrity Beauty Looks From the Grammys We’ll Be Copying ASAP
【Apple】He calls my lunches gross and feeds them to his coworker to “dispose” of them… But then…