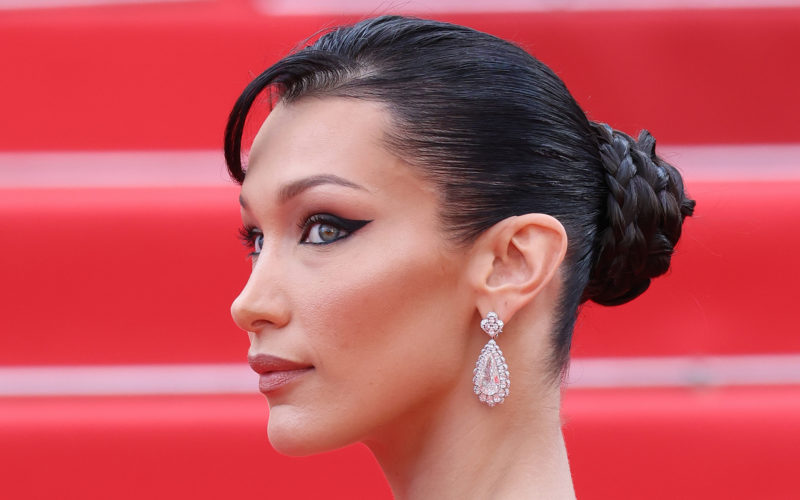 Festive soirée season is upon us! That means sparkly outfits to plan, party invitations to sift through, and manicure appointments to make. And of course, holiday party hairstyles to choose.

As far as beauty is concerned, hairstyling is often the final act in the holiday party prep process. The crowning glory! Short, long, up, or down — your hair ties the whole look together. Formal Christmas functions and elegant New Year’s Eve nights become opportune moments to experiment with hairstyles we’ve waited all year to try.

From gold-flecked afros and bow-shaped buns to fun Y2K revival updos, look to celebrities for eight show-stopping looks to recreate. Taking inspiration from Bella Hadid, Rihanna, Hailey Bieber and more, scroll on to find holiday party hairstyles worthy of a Gatsby gathering. We promise you’ll be the life of the party.

Since May, we’ve had our eyes on this updo worn by Brazilian model Caroline Trentini on the Met Gala red carpet. Sculpted by Erol Karadag, this bow in the front, bun in the back style is ideal for party-goers looking to try something a little avant-garde this year. Sure, this look will take a little extra planning (and maybe practice), but if you start now the payoff will be well worth it. Besides, what could be more festive than looking like an actual gift yourself?

Protective style wearers are likely no strangers to adorning their hairdos with cuffs and beads, but Rihanna’s bejewelled braids will surely serve as new inspiration for those who’ve tucked their natural hair away for winter. Crafted by Naphia White, RiRi’s go-to hairstylist as of late, the incorporation of treasured beads and baubles are the finishing touch you just might be missing.

If it’s soft simplicity you seek, look to Hailey Bieber’s take on a ’90s updo styled by Amanda Lee. “It’s been such a nice journey of kind of just doing less and learning that less is more,” the trendsetting model told People this summer of her newly minimalist approach to makeup. This less-is-more philosophy seems to have translated to Bieber’s hairstyling as well. Though there is often an element of elegance to her looks, there is equally a sense of ease that still works sublimely for a night out.

We hope you don’t mind being the centre of attention, because you’re sure to steal the show with this impossible-to-ignore bedazzled hairdo. As confirmed by this tour look from Alicia Keys, it’s clear that Euphoria-esque rhinestones aren’t going anywhere, and we’re pleased to hear it. Add a little interest to a jumbo twist-pony like this one with rhinestones around the perimeter of the face to keep all eyes on you, all night. A little spotlight never hurt anybody, right?

In 2022, we find ourselves in the midst of an early aughts revival — and if you’ve made it through the year without giving in to Y2K trends, that defiant streak may very well end here. Blame your acquiescence on Cassie with her imposing spiked bun updo and face-framing tendrils. “It’s giving Masterpiece,” says stylist Dhairius Thomas of his creation in an Instagram caption. Masterpiece, indeed.

This is not the viral middle-parted Bella Hadid bun that garnered 19.5 million views (and counting) on TikTok’s #bellahadidbun hashtag, but it is a sophisticated offshoot of the star’s signature model-off-duty hairdo. At this year’s Cannes Film Festival, Hadid elevated her usual slicked-back style with a braided bun and strategically placed tendril by Evanie Frausto, a hairstyle upgrade just begging to be recreated for your next festive outing.

At the Black Panther: Wakanda Forever premiere in London earlier this month, actress Danai Gurira served the statement hair of the season, sporting a cropped afro adorned with gold flakes to match the embellishments on her Elie Saab couture gown. If there’s any gold involved in your holiday gathering get-ups this season, seize the opportunity to recreate this gilded work of art.

The versatility of Megan Fox’s messy bun-meets-updo allowed for the star to pair it with two contrasting looks for two separate events in one night, so it’s guaranteed to be a reliable option regardless of your outfit or makeup. Carried out by stylist to the stars Andrew Fitzsimmons, this “après sexe” style stuns from every angle with its face-contouring waves and romantic texture.