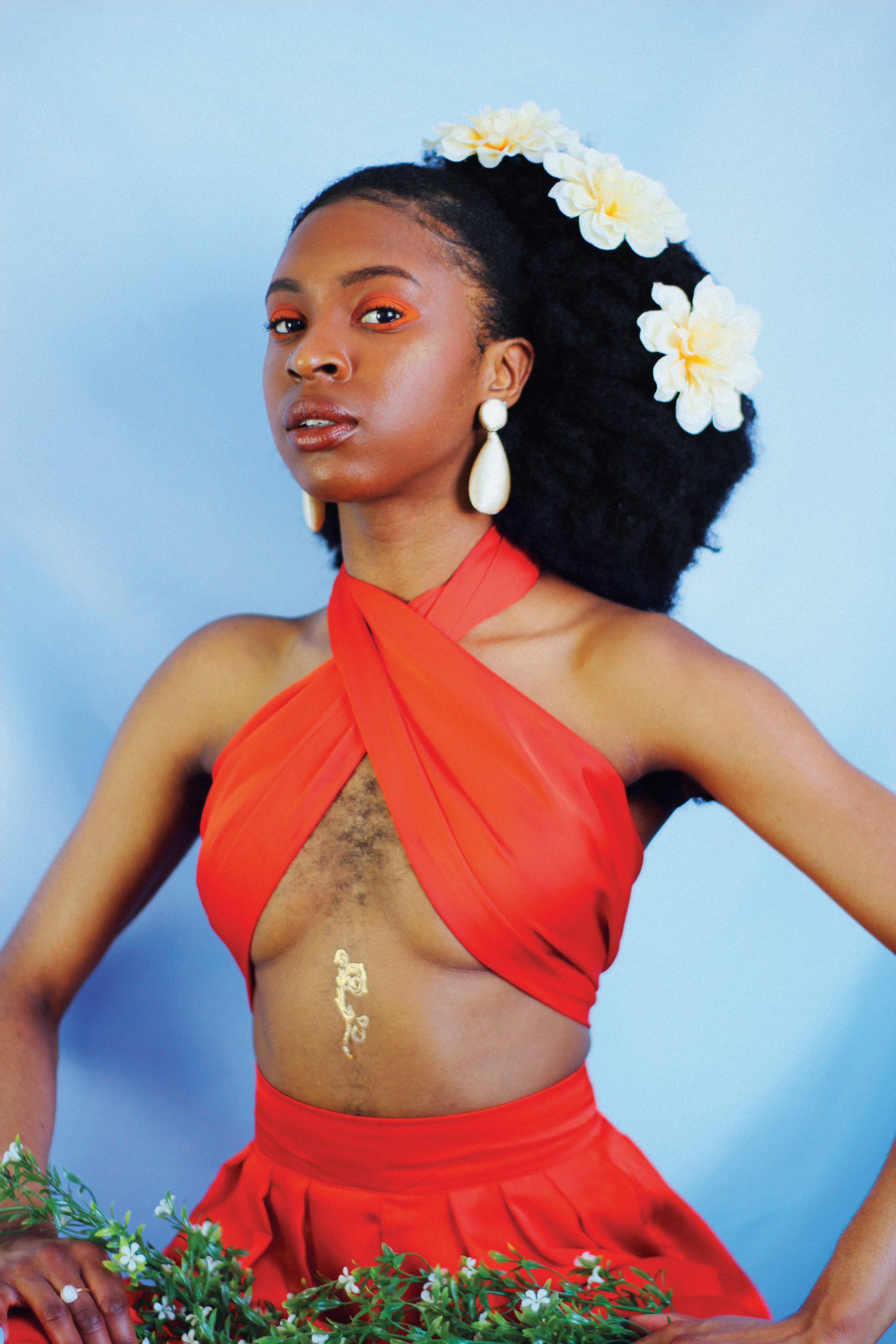 “I want women to understand the power that society has had over us for years and be able to ask themselves if they actually like their body hair or not.”

It’s no secret that Instagram looks a lot different today than it did just a few short years ago. The old model, rife with an over-saturated mega-influencer market and hyper-curated feeds, has been rejected by younger — particularly Gen Z — users and digital content creators. Slowly but surely, heavy filters, portrayals of unattainable beauty standards and endless streams of mirror selfies are being replaced with photos and messages that carry deeper meaning. For 24-year-old Montreal-based artist Esther Calixte-Bea, better known to her over 34,000 followers as @queen_esie, the shift in how she presents herself online has been a very intentional journey.

In the summer of 2019, Calixte-Bea relaunched her Instagram account with a sole purpose: to normalize female body hair — something that she’s had lots of since she was 11 — and depict it in a beautiful, powerful way. Her first posts showed off her chest hair in a low-cut lavender tulle dress, and this kicked off Lavender Project — a photography series that is now the artist’s most cherished body of work.

“I’ve had my Instagram account since I was in high school,” says Calixte-Bea. “And I felt that I was no longer being authentic by just posting ‘nice’ pictures. It was purposeless. Lavender Project was a rebirth — I could start over and be myself.” Stuck in a years-long time-consuming cycle of waxing, shaving and electrolysis, followed by periods of hiding her body hair, Calixte-Bea found that the burden of hair removal and insecurity had become too much to bear. “I was tired of feeling trapped and insecure,” she says, adding that her body was fighting back in the form of irritated skin and painful ingrown hairs. “I started questioning why I was doing all these things and who I was doing them for.”

As an artist, Calixte-Bea knew that “photography could really free [her].” But it wasn’t until she began receiving messages from women around the world who had also spent their lives hiding their own body hair and had never seen themselves represented in photos before that she saw just how important Lavender Project could be. “When I learned I was freeing other women, it became bigger than me.” After Calixte-Bea’s art began gaining popularity on Instagram, her aunt, who lives in Ivory Coast, reached out to share that she wasn’t alone and that all the men and women in their family have always had a lot of body hair. “She told me that in my great-grandmother’s time, women who were hairy were considered beautiful,” she says. Upon further research, Calixte-Bea discovered that, in fact, in many cultures, women with body hair were seen as being healthy and powerful.

These days, the body-positivity movement has made way for women to show off body hair that has been deemed less taboo (such as underarm hair), but change and acceptance has been slow. More dramatic depictions of all-over body hair don’t exist in the mainstream; they live largely in fetish communities, says Calixte-Bea. “It is either seen as gross or extremely sexualized. I don’t really see body hair portrayed in a beautiful, elegant light. I want to show women that they can go to a gala with their chest hair and leg hair on display.”

Calixte-Bea is certainly not on a mission to convince every woman who comes across her work to stop shaving or waxing. “I just want to see a world where women can choose,” she says. Currently, “removing or keeping your body hair is not a fair choice,” she adds. “It’s either ‘shave or don’t shave, but face the repercussions.’” These repercussions, of course, include judgment and stares from other people. Calixte-Bea hopes for a future of thoughtful body neutrality when it comes to female body hair.

“I want women to understand the power that society has had over us for years and be able to ask themselves if they actually like their body hair or not. I want them to choose whether they want to keep it or remove it — and not feel ashamed, no matter what they choose.”