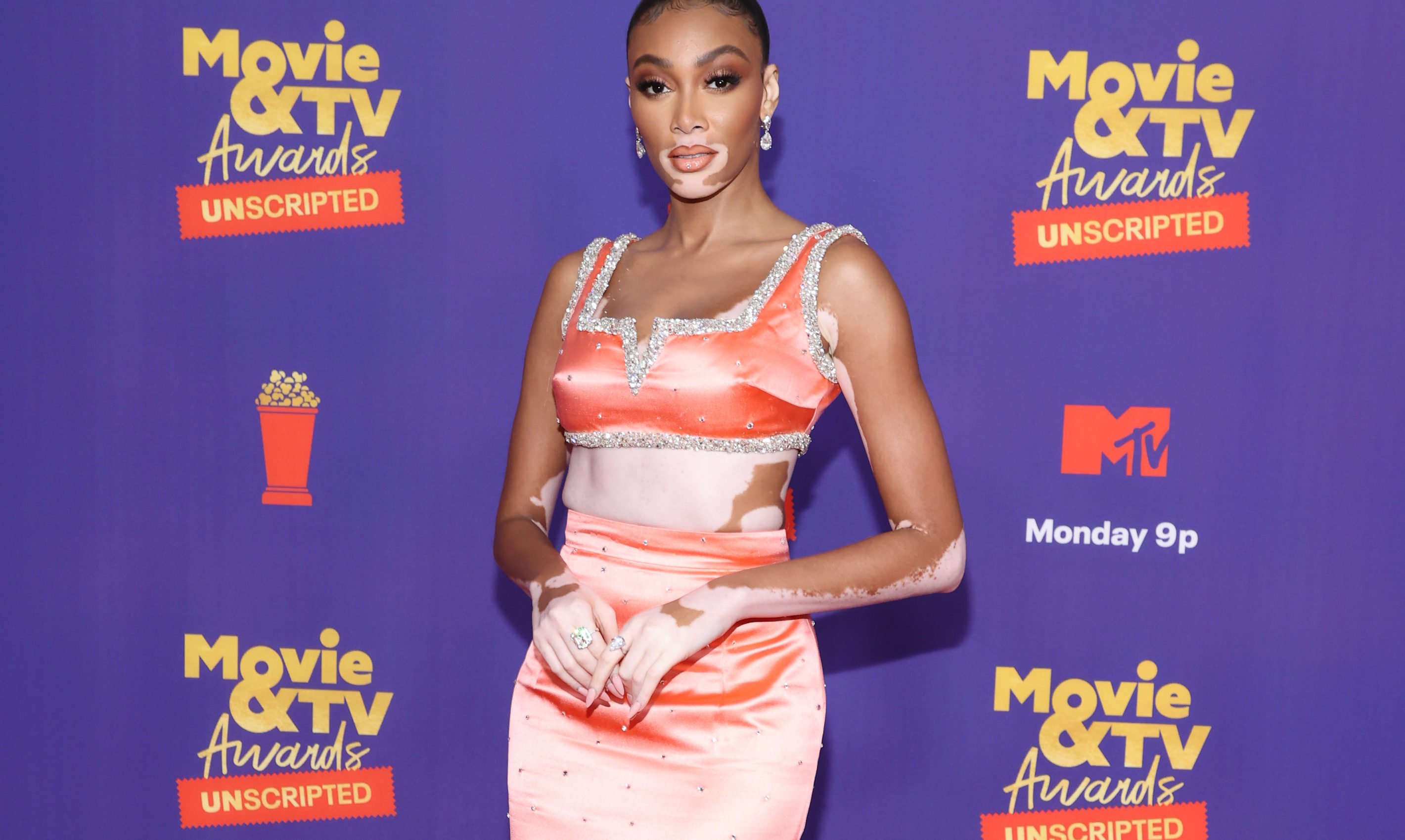 Avid award show fans experienced quite a treat this week with the recent MTV Movie & TV Awards 2021 being broken up over two evenings. There was Sunday night’s ceremony for “Scripted” story-telling, and the last night’s event for “Unscripted” shows including reality, talk and music docs.

In addition to the typically laid-back format and unexpected moments (see: Scarlett Johansson getting slimed by husband Colin Jost while accepting the Generation award from home), there was no shortage of fabulous fashion fare for those of us seeking out any glamour we can these days. Many stars chose to amp up the wardrobe wattage for the festivities, including Canadian model/series judge in the upcoming season of reality fashion design show Making the Cut Winnie Harlow who was decked out in a chic, cheery crystal-embellished two-piece by Miu Miu. Super stylist Law Roach took his own turn on the red carpet in a floor-length custom Vera Wang ensemble; Cherie Chan of Bling Empire wore a sumptuous gown by Turkish brand Haleia Couture; and Lana Condor was in head-to-toe Giorgio Armani sequins. Kathryn Hahn was a winner of two awards for her villainous portrayal of Agatha in WandaVision, and she also stole our hearts with a simple, saucy all-black look by designer Gabriela Hearst.

In major love-to-see-it moments, Leslie Jones (who took home the award for Best Comedic Performance for Coming 2 America and also hosted the “Scripted” portion of the Awards) donned a dramatic orange frilled dress by Bishme Cromartie as one of her many outfit changes; Insecure’s Yvonne Orji rocked a rainbow fringed look by Ghanaian designer Mimi Plange; and Bling Empire’s Jaime Xie wore one of the most fashion-forward pieces of the entire affair, a Spring 2021 ‘Tassel dress” by Didu. Here’s hoping for more of these brilliantly bold choices to come in light of other recent award shows’ lack of diversity with regards to red carpet designers.

But it wasn’t all glitz galore — some attendees took a more glam-meets-casual approach to their attire in a perfect fusion of the lounge-y vibe we’ve all been feeling over the past umpteen months. Black-ish/Grown-ish star Yara Shahidi glowed in a semi-formal-yet-sporty ensemble from her recently released collab with adidas Originals — take a styling tip here as we look forward to emerging from lockdown by elevating comfy outfits with pointy heels and dramatic jewellery.

Speaking of sporty, there were more than a few sneakers spotted on the red carpet too, from a pair of classic Chuck Taylors on Eric André to the bright red kicks worn by Outer Banks actor Chase Stokes (which perfectly complemented his red suit and sheer shirt from Fendi).

And showing some true style savoir faire, Drag Race’s Symone brought down the house with an archival homage to the tuxedo by Jean Paul Gaultier. Who else made our list for favourite looks from the MTV Movie & TV Awards 2021? Scroll through to find out!

Bretman Rock in a Materiel jacket and Mia Vesper pants