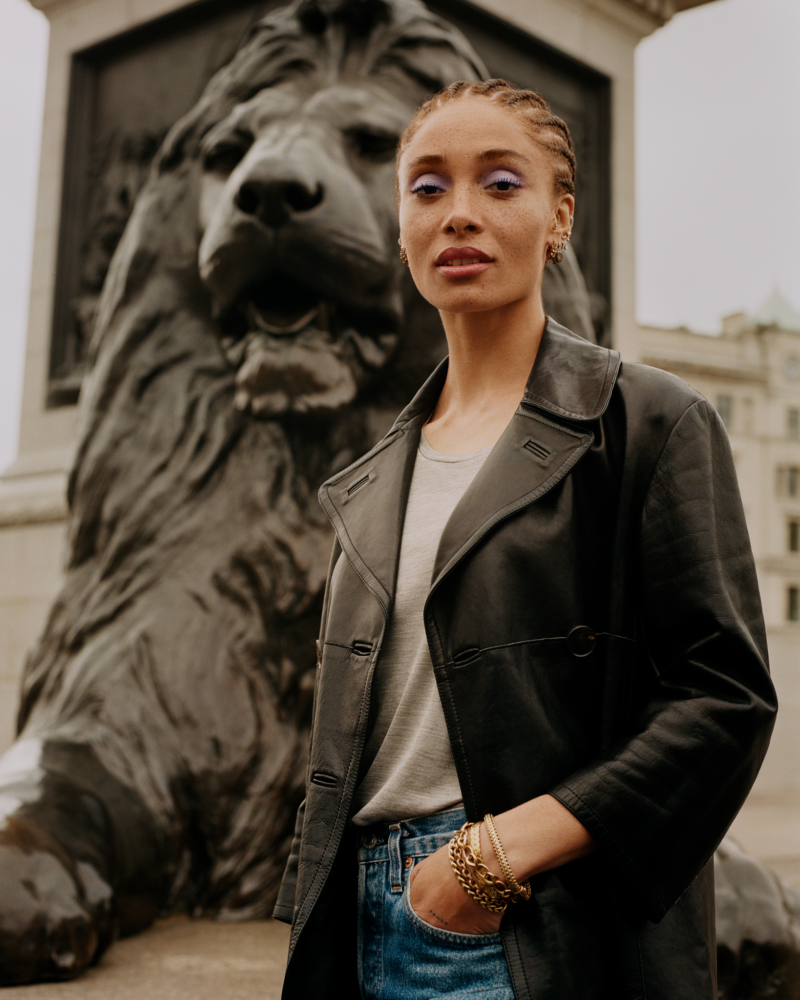 “The beauty industry and positive mental health have not always aligned, but I can do the work [to change that] with the part I play.”

“I think brands are realizing that the things that worked before, just don’t anymore,” Adwoa Aboah tells me over a Zoom call. The British model, who was born and raised in London, has just been tapped as the new ambassador for Rimmel London, and will appear in campaigns for the beauty brand throughout the rest of 2021 and beyond. “If brands want to have longevity, then they’re going to have to be more inclusive in not only their imagery and the stuff that we all see, but also in their offices, on set, and in their boardrooms.”

An outspoken advocate for more diversity in the beauty industry, Aboah says she’s proud to partner with Rimmel London because of the brand’s full backing of her message, and their trust in the way she delivers that message. “I’m excited because Rimmel is aligning themselves with me and everything I stand for in regards to my activism,” she says. “And I’m glad that my opinion matters and that being myself is key to creating great imagery [with the brand].”

In terms of her own personal experiences in the fashion and beauty industry, Aboah says she’s finally seeing less tokenism on set. “There were many times where I felt like the only one on set, in regards to race, and I’m seeing more and more now, that that’s no longer the case.”

First up on the docket for the new partnership is Rimmel London‘s Wonder’Extension Mascara, which Aboah will be the face of. “I think this will be a fresh approach to beauty,” says Aboah, “and a redefining in regards to how personal beauty is and what it means to express yourself through makeup.” Aside from the obvious London connection between the iconic U.K. brand and the British model, she says the partnership makes sense because of how accessible Rimmel London is to the masses, meaning she’ll be able to reach more people with her message and activism.

Aboah doesn’t shy away from the fact that the fashion and beauty industry has not always had the most positive impact on young girls’ mental health, and the model says her openness and vulnerability surrounding the topic of mental health on such a large scale has the potential to address and reverse the industry’s past wrongdoings. “The beauty industry and positive mental health have not always aligned, but I can do the work [to change that] with the part I play,” she says. “If I’m being myself and not giving off this perception that I’m a fully formed, perfect, self-loving, confident human being, that will be a key factor in [this partnership]. I take my responsibility to my community seriously.”

By her community, Aboah is referring to Gurls Talk, the community-led non-profit organization dedicated to promoting the mental health and wellbeing of adolescent girls and young women that Aboah founded in 2016. “We just got our 501(c)(3) during the pandemic,” says Aboah, which means that Gurls Talk is officially recognized as a nonprofit organization in the U.S. “Because I haven’t been on set all the time [over this last year] I’ve had time to really delve into Gurls Talk and give it all my energy.”

Aboah has indeed used her time off during the pandemic, which she recognizes is a privilege that many have not been given, to refocus her efforts and priorities. “I have a newfound respect for myself and my energy,” she says. “I feel like I know myself better, because I’ve had a moment to sit with myself and not be distracted by so many things. I feel more comfortable with things like talking about race and politics, and that’s only because I’ve had the time to read more. I’m not just repeating what I’ve heard; I’ve been able to form my own opinions.”

Because of this newfound confidence, Aboah says the Gurls Talk podcast has gotten “better than ever” and she feels this clarity will extend into her partnership with Rimmel London, too. “Now that the world is opening up more and more, I’m really looking forward to doing things differently, standing up for myself, and making sure that my opinion is being heard. I’m a lot more confident about my position in the industry, because I have a lot more confidence about what I have to say.”

Health Benefits of Yoga: 10+ Benefits Showing Why Yoga is Good For You
5 Cheap & Fancy Sheet Pan Dinners! | The EASIEST Lunch & Dinner Recipes | Julia Pacheco Cooking
The 11 Best Walking Apps to Help You Track Your Steps, Miles, and More
Yoga for Joint Pain and Arthritis | Yoga Joint Exercises
WHAT I EAT IN A DAY TO STAY HEALTHY! Realistic + Balanced Meals!